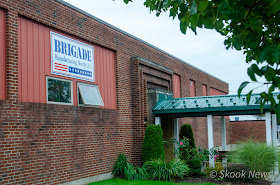 A company will bring new life to the former Gitman's Shirt Factory in Ashland.

In June, Gitman Bros. / Tom James Company announced they would be closing their Ashland Facility in the 2200 Block of Centre Street in August/Early September. 2020.  The closure would leave almost 100 people without a job.

Starting this week, a new company has moved in and will give the facility new life and keep jobs in the borough.

Brigade Manufacturing Inc., of Tullahome, Tennesse has taken over the facility.  The company makes clothing for the U.S. Armed Forces as well as for the United State Postal Service.  The Ashland location will focus on shirts for the Postal Service for now.

Gitmans employees had to reapply with over half of the former employees submitting applications and keeping their jobs.

A deal between Gitman and Brigade reportedly happened after Representative Dan Meuser seen a newspaper article on the Ashland Shirt Factory closing and reached out to Brigade's board of directors Vice Chairman Richard J. Holcombe which led to the company's interest in the building.

Brigade's employee are expected to begin production at the facility this week.